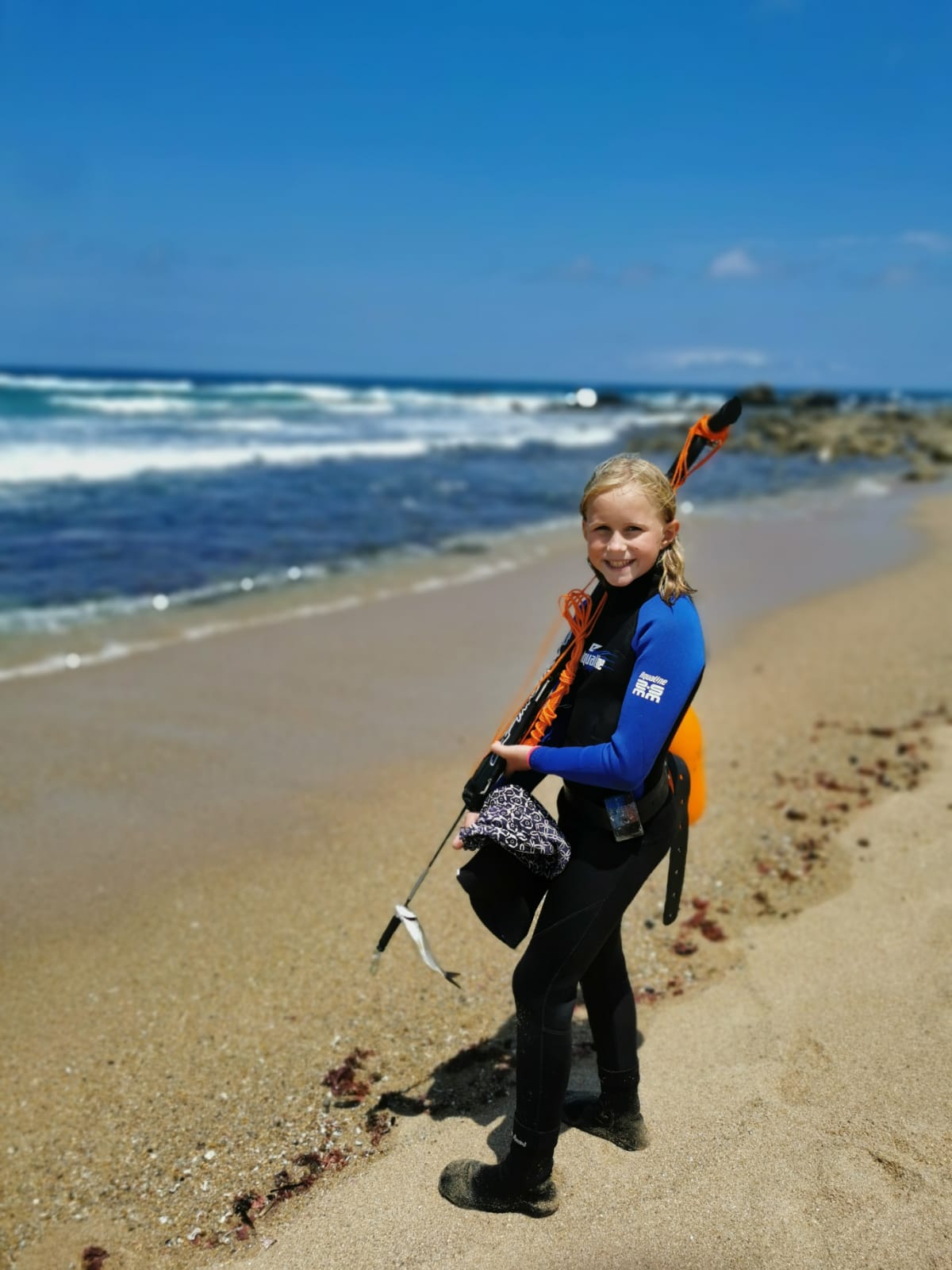 Miss Ella Bunge hails from the South coast of KZN South Africa and at 9 years old is already bringing home dinner from the sea!

This last week she got her full bag of four Shad/Tailor/bluefish and fed the whole family says dad Kurt Bunge, which is a step up already from the Karanteen she managed to bag the week before.

Her Dad reckons her younger sister Leah will follow soon into the ocean and be another youngest Spearo in the family (pictured next to Ella). Ella has her sights set on bagging a Bronze bream next and her dream feeshie is currently a Garrick/Leervis/Lichia which she hopes to get a shot at this next Garrick season which starts in May this year and her favourite diving spot Ramsgate is the right place to look for Garrick.

Her Spearo hero’s are Dad and Master Don Solomon from Pathos South Africa.
The future is bright for South African spearfishing with young Spearo’s like Ella and her sister joining the ranks!

“Yowser! Thank you young Ella for featuring on the Master Watermens as our youngest spearo ever! And thanks to Dad for sending in the pics and story! Maybe soon Ella and The Bear can team up and go for a dive together and make some video? Maybe then Ella can teach the old Bear a few lessons!” – Xona

The Master Watermen website and YouTube Channel love to feature stories like this. If you have a story, video or some pics, please consider sending it in to The Bear for consideration. He is on n3ptun3dc@gmail.com anytime!

SEO by The Sardine News for the Master Watermen. Site and hosting by TLC for your Business.

Ocean Safari with Chelsea Dog and the B2 Humpback Whales

Richard’s GT and other stories from Umzimkulu Adrenalin today

Richard’s GT and other stories from Umzimkulu Adrenalin today Richard’s GT and other stories from Umzimkulu Adrenalin: Richard and Nina called us up for some fishing on the estuary this morning. They are considering getting a double kayak and heading out together. I began by telling them that kayaks are the number one cause of divorce on any river. So we took the big boat rather! The mouth has closed The Umzimkulu Estuary closed a few days ago this week, and a ginger coloured topping has enveloped the entire place. It’s the fresh water that has been pushed up by

Bucktails vs The Law

Bucktails vs The Law Bucktails vs The Law: “Sean, Sean, please man, we need your assistance. We’ve been arrested for jigging with bucktails! Fishing down here in PSJ!”, came the call. DAFF And so I sprang into action. Called up my dear DAFF contact Bongani, and asked him about it all. Bongani pulled out of the Mtata traffic he was in at that moment, and we discussed the situation. Over the following piece of legislation. The law! While there is literally zero chance of misinterpreting the intent of section (c) – its application to real-life normal fishing methods and styles

Fishing School is back on at Umzimkulu Adrenalin