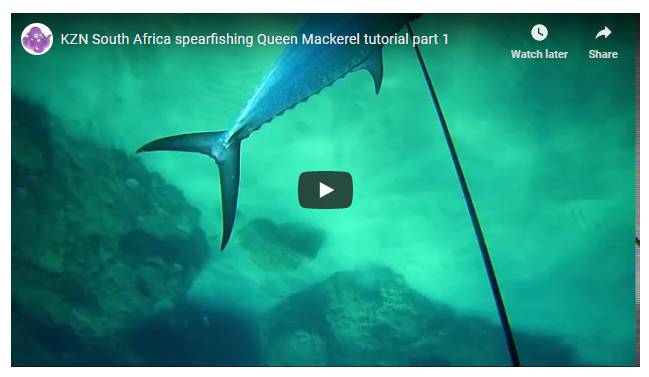 Scomberomorus plurilineatus  AKA Queen Mackerel AKA Natal Snoek are one of my favourite species of game fish to hunt along the South African coastline especially in the Kwa Zulu Natal province. There is a bag limit 10 fish per person per day and they are absolutely divine to eat! This is the first in a four part Tutorial on how to spearfish for Natal Snoek.

They are almost present all year round on the KZN coast but are more plentiful here in the summer months from November to April when they come down from Mozambique to breed and obviously with the Sardine run June to August on the South coast of KZN.

They are game fighters and pound for pound one of the strongest game fish we have here in KZN with bigger specimens being able to strip your whole reel (they can attain 10kg plus, SA record T. Dreyer 11.4kg KZN 1985).

They hunt shallow reefs from the backline surf out to 20m plus in depth and are a shoaling game fish species sometimes up to 200/300 fish in a shoal. Early morning and late afternoons are the best time to look for these small steam trains.

In the episode we can see how fast conditions can change on the KZN north coast especially with a pushing tide with the visibility going from 6m to 15m in about an hour and the water temp bumping up a couple of degrees Celsius as well. Natal Snoek love warm water especially around the 25 Deg C mark and when the water is colder they become very spooky (hard to approach and tend to take flight at the smallest sound etc). I also show how to play a Natal Snoek on the long runs and to shoulder one’s gun using the bands and play the fish using the line and not the reel. Also watch out for the playing dead Natal Snoek and the final quick run where a LOT of beginners lose their fish.

Jason Heyne aka The Bear