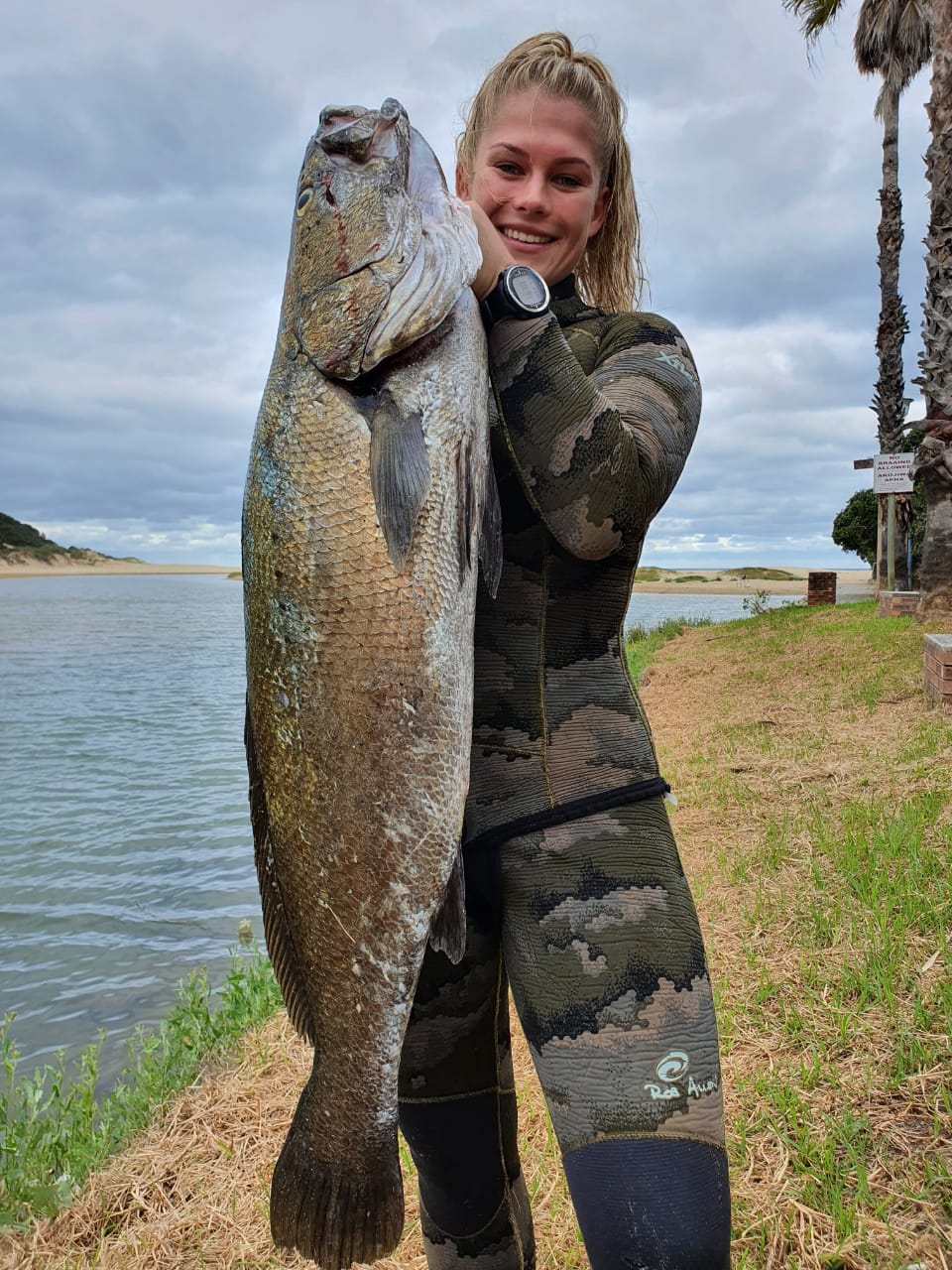 Taylor tells me she was trying to put some more points on the board for the Diving Divas spearfishing Champs which runs from February to November when she managed to bag this Beauty daga salmon!

Diving Divas South Africa is a group which was formed to help SA women grow & learn spearfishing with the guidance of experienced spearfishing women to compete for provincial and national colours in spearfishing and also to have a passion for the sport. Contact @divingdivasSouthAfrica divingdivassouthafrica

Taylor is from East London in the Eastern Cape and she says that conditions last week Wednesday and Thursday (24/25-02-2021) were truly epic with calm seas and crystal viz which is not an everyday occurrence in East London! Taylor and her dad dived the Wednesday but she did not get the extra points she needed so they decided to hit another shore dive on the Thursday after work at 3 Sisters reef.

3 Sisters is a long 3Km walk from the parking lot at Bonza Bay beach on soft sand but well worth the slog and needless to say Taylor was quite amped to get in and dive by the time they got there! They swam the 1km to the reef and decided to dive the inside section of the reef with a big cave that has two entrances.

After diving for a while Taylor managed to bag a small Baardman (Tassel fish) and her dad swam up to her and asked if she would like to shoot a Kob? There’s a whole shoal in the cave with a rockod and a Zebra fish! Taylor dived down to have a look even though at her experience level she finds cave diving a bit skits and there was quite a bit of wave surge which can pin you inside the cave. After checking out the gloom inside the cave she told her dad that there was zip in the cave.

Dad went back to have a look and returned saying she must look carefully and you will see the Kob in the back. Back down she went and guess which fish she shot? The Zebra! Hahaha…needless to say dad was nonplussed! But he came to the rescue and said let’s check the other entrance to the cave and the daga salmon had moved that side! Lucky!

Taylor psyched herself up, breathed up properly and went down again. Having a look around in the second cave entrance and she saw zip again in the gloom at first but decided to move into the cave further until she got her body halfway in the cave with dad almost having a hernia topside! Aha! Now she could see the shoal of Kob and all of a sudden she saw there was a rock in the cave with a big silver fish behind it! She let fly with the spear and managed to get a good holding shot remembering to grab her line and not the gun on the way out of the cave playing the fish on the way to the surface.

A tug of war tussle ensued and she managed to get her first Kob to the surface, dad beaming with pride! 12.05kg is a decent Kob by shore diving standards…well done Taylor!

And that’s not all…they went out a bit deeper and Taylor was lying on the bottom waiting for fish and feeling all rosy with her Kob when she glanced up towards the surface and a Marlin was swimming over her! A frikken MARLIN! She got spooked at first thinking shark then she spotted the bill and big pec’s and tail fin…and wisely opted not to pull the trigger and let it swim by for another day!

Spike fish (marlin) are spearfishing rig thieves of note and that’s stealing from Master Divers with all the right gear! You did the right thing letting it swim by…especially on a shore dive Taylor!