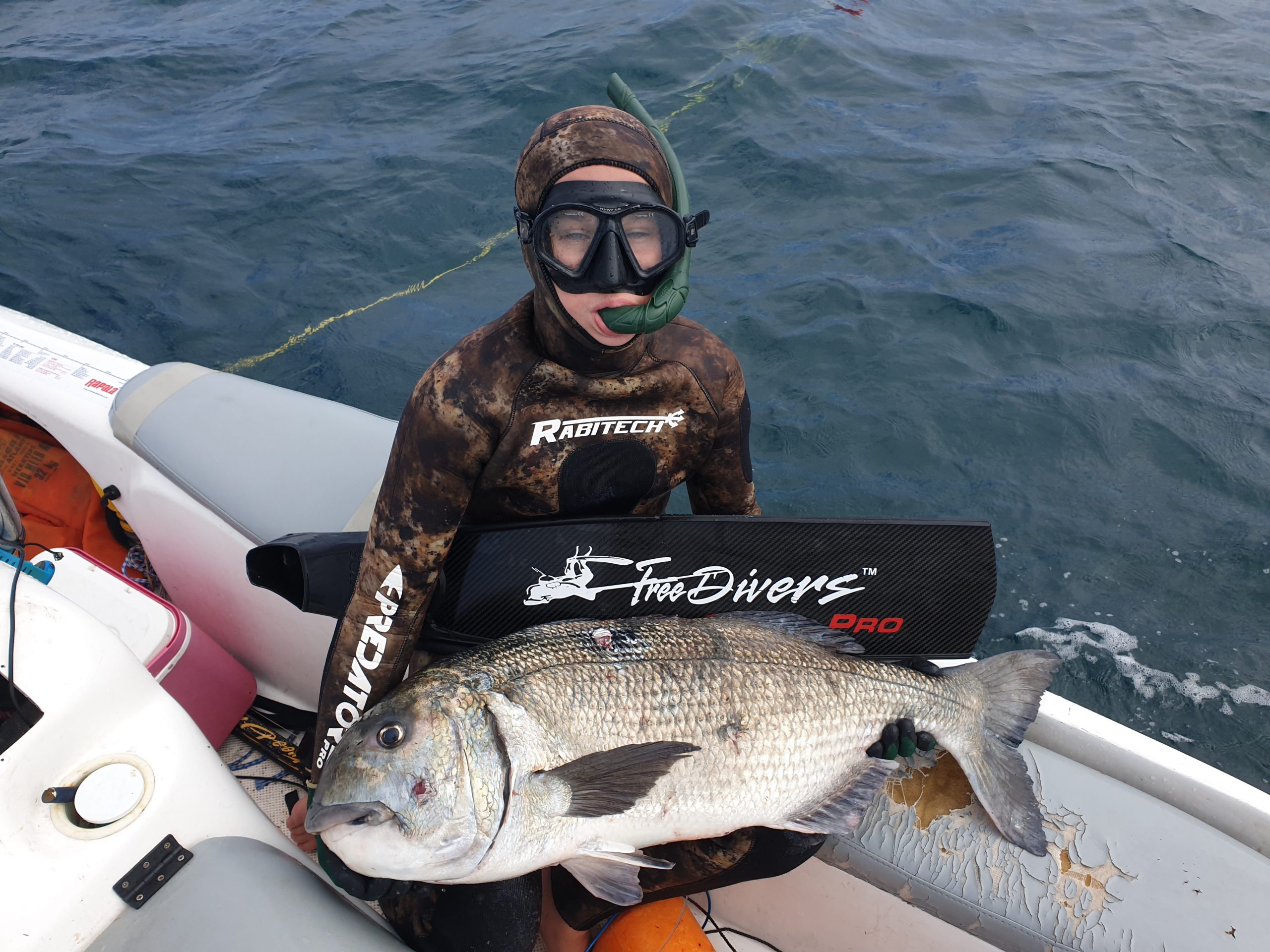 Brusher (Sparodon durbanensis, Cracker) are just about the wiliest fish to shoot in South African waters and anything over 10kg is considered to be a trophy fish. They are resident in the Cape waters and migrate up the East coast to the KZN coast normally late winter and return to the Cape in early summer. You will only get one chance to pull the trigger on a big Brusher and then you will not see him again. They are predominantly found in the white water surf zone but can be found out deeper in caves and around shallow pinnacles and gullies.

Griffin is from Port Elizabeth in the Eastern Cape and managed to bag this epic fish on a boat dive off a local spot called Noordhoek diving with his dad Master Gletwyn Rubidge. Griffin is very lucky to have a Master like Gletwyn as a coach and mentor. Dad says he keeps an eye on Griffin when diving and if he cannot see Griffin from the surface he dives with him for safety. Under dad’s tutelage Griffin has already dived to 18m! The spot where Griffin got this big Cracker was in 12m.

Griffin says it is one of his dad’s marks that he normally goes to look for Black Musslecracker (Poenskop). The viz was not to the floor so dad accompanied Griffin on his second dive down to lie behind a small ledge. The mark was full up with lots of Parrots, Bronze bream and Tasslefish says dad and he saw the big Cracker just cruise in and stop in front of them checking them out. Dad said he had a hard time resisting the urge to pull the trigger and it seemed like it took forever for Griffin to see the fish! Hahahaha!

Griffin says he saw one or two fish whilst lying on the floor that could have been PB’s for him but he waited something bigger. He only noticed the huge Cracker coming in from the left after his dad had seen it towards the end of his dive. He slowly extended his gun out and squeezed the trigger managing to plant a good holding shot in its back! The big fish sped off down the reef peeling line off his gun reel so fast it pulled him down even with the drag fairly loose as he kicked towards the surface. The fish went straight to a cave and holed him up properly. Griffin grabbed a smaller gun and went back down and managed to get a kill shot on the beast Cracker through the head and got it out the cave and on the boat!

Well done Griffin there are a lot of good divers out there that still dream of landing a bus Cracker like that! I expect to see many more great fish from this young lad in the future!

“Thank you Jason for this mind-blowing feature” – Xona

Site and SEO by The Sardine News for The Master Watermen