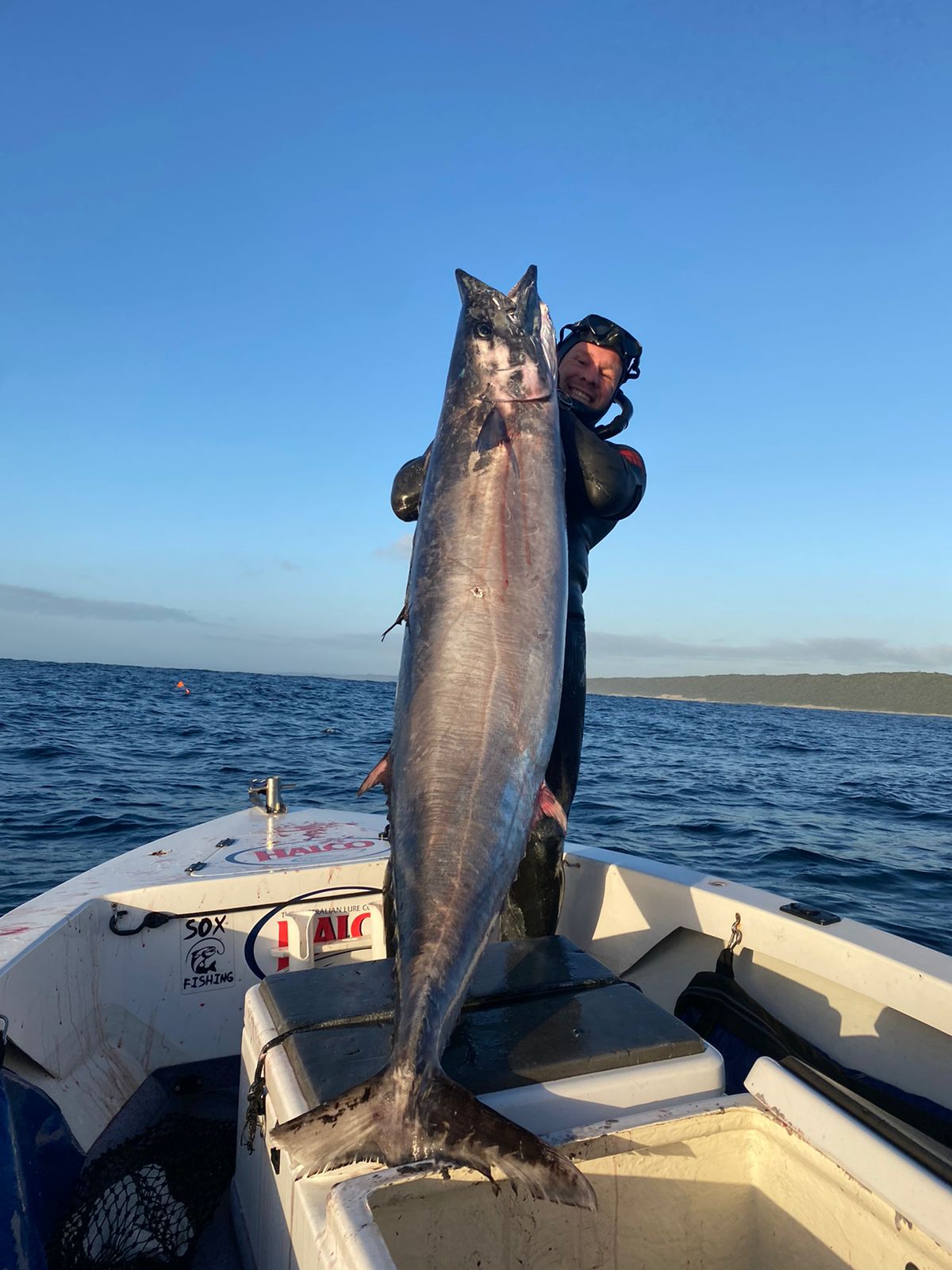 How is it that the best blue water game fish competitions are the ones that you could not attend!? The Umhlanga Spearfishing Club Blue water compo this year was deffos no exception to the aforementioned Murphy’s law!

On the night after the compo there were stories being leaked out about Wahoo so loose they were jumping in the hatches and of course there was a picture doing the rounds of Master Peter Jacobs with a Tank 40.5kg Wahoo! And then another pic and another pic everyone getting Wahoo some 20 to 30kg plus…legendary…and I missed the compo but I had 3 years to enter hey Kyle? Bleakness of note!

Even new Diver James Purcell got stuck into a beast Wahoo 10 minutes into his 1st Drift on Cpt Jannie’s boat. Now bear in mind here that James only recently shot his 1st Natal Snoek so plugging a 30kg plus Wahoo is a bit of an upgrade in the scheme of things!

Buzzard crew were as usual on form as a team with Cpt Peter Jacobs (Master Adam Waites, Master Luke Garlick and Master Markus Potgieter) landing the biggest and winning fish of the compo a 40.5kg Wahoo.

“No massive story really, 40.5kg Wahoo shot during the comp, nothing exciting or groundbreaking “ say’s Master Pete…hahaha. “I just got lucky with the right fish on the right day. First drift, good shot so it didn’t rev too hard. We put float and landed Adams fish (Wahoo 22.45kg) first then sorted mine out. We dive as a team so shared the prize money. Luke’s Couta of 23.5kg was also a bonus on the day which got him 5th prize for biggest Couta ”

See Two Snoeks Tommy spearfishing is a TEAM sport, you said it not me!

I had my money on Luke Mollison the Hoo whisperer to win the compo but maybe the decision to go North with Captain Alistair Jones on Mr Grinch with Liam Mullany ( 90 percent of the action was South on the day) hampered his efforts. But he still managed a slab Wahoo of 32.5kg which secured him 6th place for second biggest Wahoo.

“Ja over the course of the last two and a half years of the Compo being delayed due to Covid and world cup Rugby finals I have changed boat and crew a few times. It was great to take my newly acquired boat Mr Grinch out for a spin at Sodwana. I was originally crewing with Gary Uys and Ryan Burmeister but Gary sold his boat! North was quiet with the Couta and we decided to hit a lunch time Wahoo hunt at Elusives on the way back. Lucky we did and Luke managed to bag his 32.5kg Hoo.” Cpt Jonesy said about his day out.

The crew of Iggy Cpt Chris Koen, Master Royd Williams and Ryan Schubel flew the Zululand flag well on the day with 3 slab Wahoo down South. Cpt Chris’s 27.5kg Wahoo would have been around the 33kg mark but unfortunately the tax man (Large Bull shark) took a hefty chunk out of it towards the end of the fight. Hard luck Koenie! Royd got a solid 29kg Wahoo and Ryan managed a 22kg Wahoo which won him 2nd Prize for concealed weight (Wahoo 18.5Kg) .

Ex Durban North Local now Zululand farmer Master Ryan Burmeister on his boat Poseidon was not going to be left out on the day throwing 3 Couta and an Amber in the hatch winning the prize for most fish weighed.

The Comp committee boat Daddio with Cpt Quintin White, Kyle Richter, Dylan Koekemoer and Paul THB apparently had a tough day up North but did win some prizes with Paul taking The Iron so that he has a new hobby while off on maternity leave…hahaha. Cpt Quintin managed to luck 4th Prize Concealed Weight (Amber Jack 4Kg) with his 2.5kg Amber. #Nobananas goes to the crew of Daddio for their wisdom in choosing the night before the comp as a warm up to the festivities after the compo! Better luck next time lads!

Local Cpt Jannie Nienaber had a mixed crew on his boat consisting of Vesagen Mudaly, Master Richardt Botes and James Purcell. Vesagen did well landing a 25.5kg Wahoo and a 6.5kg Couta. Richardt was apparently not on form (night before’s festivities Klippies and Cola???) but still managed two Couta getting him 3rd Prize Concealed Weight (Couta 12.4Kg) with his 11.5kg Couta. Newbie James Purcell managed to plug a tank Wahoo but lost it

“The viz was about 15 to 20m and I was 10 minutes into the 1st drift when I saw the Wahoo heading away from me on the surface. So I pulled my flasher up and down to see if it would turn and come back. Which it did but then it turned away again so I pulled the flasher again and it came back allowing me to dive down and plug it. My gun reel emptied in 2 seconds flat and I clipped on the belt reel. BUT I could not bear to see my gun disappear and held on trying to get a float on I lost the fish!” Cpt Jannie said James came water skiing past the boat after he shot the fish!

Bleakness Jamo! Master Richardt saw the fish and recons it was a Slab… school fee’s being paid! James got the spirit award for the competition for which he a got the booby price (an iron) for best spirit at the compo due talking everyone’s ears off! Apparently the fine’s meeting was hectic because Master Richardt had some Jagermeister which may have fuelled James’s beak!

Well done to the USC committee and crew along with all the sponsors for the competition! Sounds like it was a cracker event!

Check out the pictures and PDF’s I have attached for more details.

As always Dive Safe and Straight Spears from The Bear…